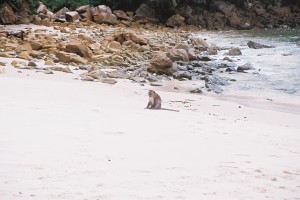 I know, I’ve been posting stuff from other people recently.  I have been a bit busy sending manuscripts and writing new poems.

I have more work to be published in a forthcoming issue of GUD (Greatest Uncommon Denominator) Magazine – perhaps by sheer perseverance.  I bombarded them with over thirty poems, if I remember correctly, and they have been very kind and patient with me throughout the editorial process.

This has encouraged me to try out other literary magazines.  It is a tough world out there, but somehow it seems easier to swallow rejection slips over the internet than through snail mail.   And so I forge on, sending these messages in fragile bottles.

Imagine me on a beach full of stranded bottles, each one with a poem.  I should go into the recycling business.

Jim Pascual Agustin writes and translates poetry. Sometimes he tries his hand at essays and stories. His latest book is BLOODRED DRAGONFLIES, published by Deep South in South Africa. Check out the official blog page for Bloodred Dragonflies. In 2011 the University of Santo Tomas Publishing House in Manila released BAHA-BAHAGDANG KARUPUKAN (poems in Filipino) and ALIEN TO ANY SKIN (poems in English). The same publisher released his most recent poetry collections SOUND BEFORE WATER and KALMOT NG PUSA SA TAGILIRAN. In 2015 a new poetry collection in English, A THOUSAND EYES was released. His first collection of short stories in Filipino, SANGA SA BASANG LUPA, was released in 2016. UK publisher The Onslaught Press launches his poetry collection, WINGS OF SMOKE, worldwide in February 2017. San Anselmo Publications released HOW TO MAKE A SALAGUBANG HELICOPTER & OTHER POEMS in 2019 followed by CROCODILES IN BELFAST & OTHER POEMS in 2020 - both books can be purchased through their Facebook page. END_OF_DOCUMENT_TOKEN_TO_BE_REPLACED
This entry was posted on Wednesday, July 15th, 2009 at 23:45 and tagged with Jim Pascual Agustin and posted in Uncategorized. You can follow any responses to this entry through the RSS 2.0 feed.
« SECOND Viva Palestina aid convoy enters Gaza
“The Disneyfication of War” – George Monbiot »

6 responses to “No Apologies”