I am copy-pasting the following from Avaaz’s call for action. Please do read it and sign – and do more if you can. 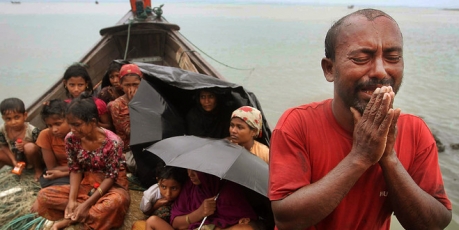 Most people didn’t know who the Rwandans were until it was too late, and 800,000 of them were dead. Right now, the fate of Burma’s Rohingya people is hanging by a thread. Racist thugs have distributed leaflets threatening to wipe out this small Burmese minority. Already children have been hacked to death and unspeakable murders committed. All signs are pointing to a coming horror, unless we act.

Genocides happen because we don’t get concerned enough until the crime is committed. The Rohingya are a peaceful and very poor people. They’re hated because their skin is darker and the majority fear they’re ‘taking jobs away’. There are 800,000 of them, and they could be gone if we don’t act. We’ve failed too many peoples, let’s not fail the Rohingya.

Burmese President Thein Sein has the power, personnel and resources to protect the Rohingya, all he has to do is give the word to make it happen. In days, he’ll arrive in Europe to sell his country’s new openness to trade. If EU leaders greet him with a strong request to protect the Rohingya, he’s likely to do it. Let’s get 1 million voices and plaster images of what’s happening in Burma outside his meetings with key EU heads of state.