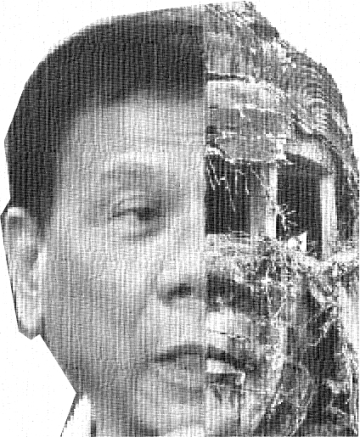 The late dictator’s image rendered
in wax, displayed in a Quiapo-quality
glass box, is what his family would love
to drag down from the North

all the way to sweltering Manila.
Only those who have lived
through the darkness might ask:
How many candles could they carve

out of his non-human remains?
Will his greatest admirer simply
mow us down with curses and bullets,
deaf as he is to any protest?

The above is the first draft. Here is the new version which I hope is a bit of an improvement, thanks to the generous members of my secret online poetry discussion group, The Boathouse:

The late dictator’s image
rendered in wax, displayed
in a Quiapo-quality glass box,

down to sweltering Manila.
Only those who have lived
through the darkness might ask:

How many candles
could they carve out
of his non-human remains?

THE NARRATIVE has always been that the body in the glass coffin in Batac, Ilocos Norte, lying there since 1993, is yet to be buried because the state refuses burial. As a result, the body lies embalmed until God knows when. There is an irreverent twist to it, sacrilegious even, that appeals to most cultural norms barring the desecration of the dead. In short, the message is: The state is cruel to disallow proper burial.

I have had two opportunities to visit the crypt of Ferdinand Marcos. The tourist gazer is usually led to an inner chamber inside the mausoleum just beside the family’s “ancestral house.” I enclose that in quotation marks because the house is anything but old; it is a new building designed to have fake, exposed “paletadas” so as to conjure antiquity; this is also part of the narrative. This first visit had an Imeldific air to it—the sound of choral cantatas filled the chamber.

The second visit some years later was unexpectedly and surprisingly revealing. A close Marcos family friend escorted us to the crypt. There in the stillness of the chamber (no choral cantata this time), looking down on the finely chiseled body of the deposed president—you could clearly see the veins on his hands, or so I thought—the family friend whispered: This body is just a wax replica, the real corpse had already been buried underneath. End of the narrative.

Jim Pascual Agustin writes and translates poetry. Sometimes he tries his hand at essays and stories. In 2011 the University of Santo Tomas Publishing House in Manila released BAHA-BAHAGDANG KARUPUKAN (poems in Filipino) and ALIEN TO ANY SKIN (poems in English). The same publisher released his most recent poetry collections SOUND BEFORE WATER and KALMOT NG PUSA SA TAGILIRAN. In 2015 a new poetry collection in English, A THOUSAND EYES was released. His first collection of short stories in Filipino, SANGA SA BASANG LUPA, was released in 2016. UK publisher The Onslaught Press launches his latest poetry collection, WINGS OF SMOKE, worldwide in February 2017. END_OF_DOCUMENT_TOKEN_TO_BE_REPLACED
This entry was posted on Thursday, August 18th, 2016 at 07:45 and tagged with crypt, dictator, Duterte, Jim Pascual Agustin, Marcos dictatorship, Martial Law, More wax than human remains, Quiapo, wax and posted in Asia, Filipino poetry, Jim Pascual Agustin, Life in a different world, Mga Tula / Poetry, Uncategorized. You can follow any responses to this entry through the RSS 2.0 feed.
« Mr. F. Sionil Jose, how does kissing the barrel of a gun make a country happy?
Collateral damage my ass »