Of Pregnancy and Paper Children

I have the utmost respect for mothers. It is no small effort to carry a life that is slowly growing inside you, turning your body into a vessel that seems less and less your own. Imagine bearing two or more!
My wife didn’t have the easiest time when she was carrying our twins. Likely only the mothers of twins or multiples will ever have a true idea of how it was for her. All I could do then was try to be around whenever she needed any assistance, especially in the last few months of the pregnancy. I’ll spare you the details of those days for now.
Here’s a poem I wrote way back, not to make light of the whole ordeal, I hope. The poem appeared in my book Alien to Any Skin (UST Publishing House, 2011) – a book I wish more readers would seek as it contains what I feel is a substantial body of work.

I watched the moon lift herself,
a woman ripe
with twins.

Brimming with awesome fullness,
she heaved her burden of light
over the eastern mountains,
past sandstone peaks,
cubist dream of broken rocks,
deserted cities of the future.

Up she pushed herself
until the blue darkness
surrendered his realm.

A hush fell upon the heavens
reminiscent
of my wife’s visit
to the clinic. 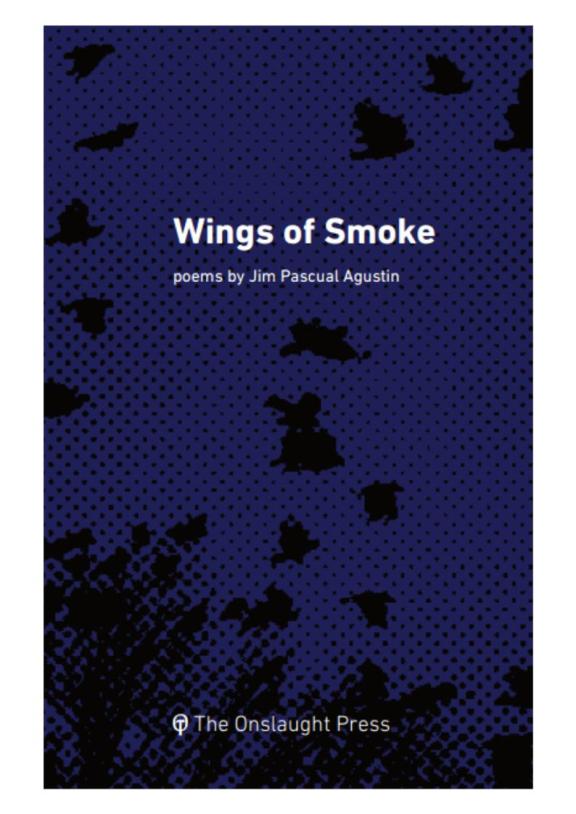 I call my books paper children. The struggle to bring each one to life is not at all like carrying a real child.
A paper child is bound to be put out for adoption once born. Yet I feel something similar to a parent who is forced to surrender a child for whatever reason.
What I let go will have to wind its own way without looking back. It has to find its own home. Otherwise it will be forever lost, perhaps shredded beyond remembrance by cruel time.
Who will adopt this new one?
My UK publisher, The Onslaught Press, posted an initial announcement regarding the worldwide release of Wings of Smoke. CLICK THIS LINK to the page on their website where you can place your order come 1 February 2017.
Two other fantastic titles will be released – Hold Your Breath by Waqas Khwaja (Pakistan-United States) and long days of rain by Janak Sapkota (Nepal).
Friends in South Africa will have to wait just a little longer – 1 March 2017 – to be able to order the book through me. I’ll see if an arrangement can be made with accommodating local book dealers.

Here is the Goodreads.com link to WINGS OF SMOKE.

Aside from The Onslaught Press website, the book will also be made available through Amazon.

Jim Pascual Agustin writes and translates poetry. Sometimes he tries his hand at essays and stories. His latest book is BLOODRED DRAGONFLIES, published by Deep South in South Africa. Check out the official blog page for Bloodred Dragonflies. In 2011 the University of Santo Tomas Publishing House in Manila released BAHA-BAHAGDANG KARUPUKAN (poems in Filipino) and ALIEN TO ANY SKIN (poems in English). The same publisher released his most recent poetry collections SOUND BEFORE WATER and KALMOT NG PUSA SA TAGILIRAN. In 2015 a new poetry collection in English, A THOUSAND EYES was released. His first collection of short stories in Filipino, SANGA SA BASANG LUPA, was released in 2016. UK publisher The Onslaught Press launches his poetry collection, WINGS OF SMOKE, worldwide in February 2017. San Anselmo Publications released HOW TO MAKE A SALAGUBANG HELICOPTER & OTHER POEMS in 2019 followed by CROCODILES IN BELFAST & OTHER POEMS in 2020 - both books can be purchased through their Facebook page. END_OF_DOCUMENT_TOKEN_TO_BE_REPLACED
This entry was posted on Wednesday, January 25th, 2017 at 09:16 and tagged with Jim Pascual Agustin, poetry collections, The Onslaught Press, Wings of Smoke and posted in Filipino poetry, Filipino-South African, Jim Pascual Agustin, poetry, Wings of Smoke. You can follow any responses to this entry through the RSS 2.0 feed.
« The Boy in the Chair – a first draft
“The Breath of Sparrows” on Soundcloud »