Hot cross buns were introduced to me upon my arrival in Cape Town. Through the years they’ve gotten more expensive and smaller, sometimes sooner than packaging designers can manage to adjust to the new budget sizes. This hot cross bun packaging clearly shows how much consumers have been duped. 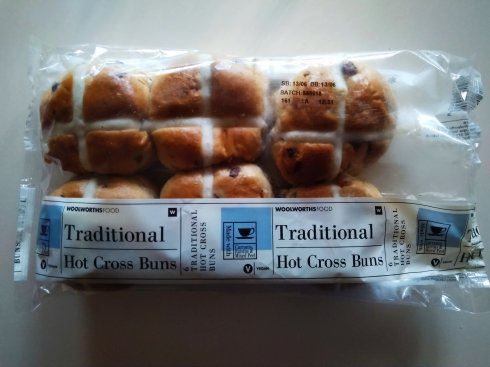 The same goes with many items like chocolate bars and breakfast cereal boxes.

Aside from this old trick that many businesses play on us, there’s also the environment to consider.

Woolworths is notorious for excessive packaging, often in hard, single-use plastics. Do they really know or care about what is happening around us? Just wondering.

Jim Pascual Agustin writes and translates poetry. Sometimes he tries his hand at essays and stories. In 2011 the University of Santo Tomas Publishing House in Manila released BAHA-BAHAGDANG KARUPUKAN (poems in Filipino) and ALIEN TO ANY SKIN (poems in English). The same publisher released his most recent poetry collections SOUND BEFORE WATER and KALMOT NG PUSA SA TAGILIRAN. In 2015 a new poetry collection in English, A THOUSAND EYES was released. His first collection of short stories in Filipino, SANGA SA BASANG LUPA, was released in 2016. UK publisher The Onslaught Press launches his latest poetry collection, WINGS OF SMOKE, worldwide in February 2017. END_OF_DOCUMENT_TOKEN_TO_BE_REPLACED
This entry was posted on Tuesday, June 12th, 2018 at 10:48 and posted in Uncategorized. You can follow any responses to this entry through the RSS 2.0 feed.
« The end of reading, just plug this in the most convenient orifice
The Wind is Not Strong Enough to Slam the Windows Shut »