If all goes well, I’ll be reading at Off the Wall in Observatory’s A Touch of Madness bar and restaurant here in Cape Town. One of the poems I intend to read is “The Man Who Wished He was Lego” which appeared in Sixfold. I shared a link to that in an earlier post. But for those who missed it, HERE IT IS AGAIN.

I’m hoping not to make the audience fall asleep. Well, an audience would be nice to have in the first place. So if you are in Cape Town or plan to have a weird night on Monday, come on over. 🙂

I’m also going to read work included in the recently released NEW COIN POETRY bumper issue. If you ever read contemporary poetry, this journal has got to be on your list. Convince your local library to subscribe to NEW COIN POETRY (check them out on Facebook).

The Man Who Wished He was Lego

His hands would be yellow
and forever curved
into a semi-square “C.”
Designed only for quick
and easy snapping

of pieces meant
to fit. His shoes
would be the same color
as his pants with no zips
or buttons, no pockets

for slipping in notes
that could be shredded
in the wash. He would need
not worry about the shape
of his head, or haircuts

and thoughts for that matter.
And best of all, his chest
would be stiff and hollow,
far too small
for a heart.

The Breath of Sparrows… for Madiba

The Breath of Sparrows
for Nelson Rolihlahla Mandela

So it has arrived, the news
of your departure. Last night
I dreamt I was in the house
of my mentor, as a frequent guest
who took a desk by the window.

A towering tree with red
and yellow flowers as big as hands,
the breeze slipping between each
petal finger. I went to his room
to ask the name of that tree.

He lay on his bed, resting
with eyes closed but aware
of the birds weighing down
the branches, leaves caressing
the roof. The breath of sparrows

like his own. There was no need to name
the tree, no need to name anything
at all at that moment. I bid him thanks
before leaving, my footsteps drowning
in sparrow wings.

Vampires that do not Fear the Light

Read two articles from the Mail & Guardian online that should scare all those who think international law can protect sovereign countries and their population from a special breed of Vampires.

Mbeki: We should learn from Libya’s experiences

Addressing the Law Society of the Northern Provinces in Sun City, Mbeki said it “seemed obvious” that a few powerful countries were seeking to use the council to pursue their selfish interests.

They were also determined to behave according to the principle and practice that “might is right” and to sideline the principle of self-determination.

“I must state this categorically that those who have sought to manufacture a particular outcome out of the conflict in Libya have propagated a poisonous canard aimed at discrediting African and African Union (AU) opposition to the Libyan debacle.”

He said this was done on the basis that the AU and the rest of “us” had been “bought by Colonel Gadaffi with petro-dollars”, and felt obliged to defend his continued misrule.

He said all known means of disinformation was being bandied about, included an argument that Gadaffi’s Libya had supported the ANC during the apartheid struggle.

“The incontrovertible fact is that during this whole period, Libya did not give the ANC [African National Congress] even one cent, did not train even one of our military combatants and did not supply us with even one bullet…

CLICK HERE TO READ THE REST OF THE ARTICLE.

It all sounds disturbingly familiar. Think of the American companies streaming into Iraq to aid the “reconstruction effort” after the invasion. If there was any doubt, this modus operandi may soon define what seems no more than a new form of neocolonialism in the Middle East. American, Nato (or both) armies will destroy your country under the guise of ushering in democracy, and Western companies will assume the lion’s share of contracts to build it up again.

And with Libya’s National Transitional Council having already announced it would “reward” those countries that were in its corner during the “revolution”, it’s anyone’s guess who will be the biggest of the war profiteers.

Whereas in the past Gaddafi’s Libya was only dealing with China, Russia and Italy, the playing field has now been levelled, in a manner of speaking. Though it has portrayed itself as having had only a “back-room” role in toppling Gaddafi, the United States wants to be the number-one oil buyer from Libya, to compensate for its decades of deprivation of Libyan oil. There can be no doubt that in due course we will see that the US will want a far bigger cut of Libyan oil supplies than it is currently letting on.

It will be said in the future that the end justified the means: the removal of a hated dictator who terrorised his own people for four decades. This may be so, and nobody in their right mind could endorse what the colonel did to Libya. But there are some questions to be asked about the selective morality at play here.

CLICK HERE TO READ THE REST OF THE ARTICLE.

Please proceed to the nearest toilet to throw up.  Now pull yourself together and fight the propaganda machine of these Vampires. 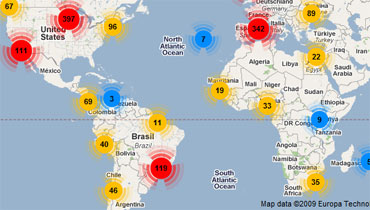 The Whistle that Became a Memory