Tag Archives: Dialect of the Tribe

The Dialect of the Tribe – MODERN POETRY IN TRANSLATION

Four Filipino poems of mine which I translated to English have been published in the most recent issue of Modern Poetry in Translation: The Dialect of the Tribe (Issue 3 Number 16). One of the poems, “Galing Ingglatera” / “From England,” appears in Baha-bahagdang Karupukan (UST Publishing House 2011). Two poems are from previous books. “Aso sa Tabi” / “Pet” is from Beneath an Angry Star (Anvil 1992) and “Siglo” / “Century” from Salimbayan (Publikasyong Sipat 1994) while the last one, “Ngayong Gabi” / “This Evening” has never seen print.

I am looking forward to receiving my copy of this amazing anthology in the post. Perhaps I’ve found a new audience for my work? 🙂 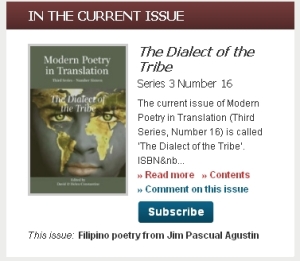 Here is a snippet from the issue’s editorial:

A language must evolve or die, all its speakers may contribute to its life. And every speaking voice of a language is unique, every person’s speech is an ideolect, every poet’s language is as distinguishable as his or her DNA. Translating a poem, you mix your own voice with the poet’s. Thus doubly flighted, poems pass over the frontiers like seeds.