The Poem version of “Mass Murderer on World Tour”

Yesterday I shared a news article on a former world leader. I didn’t know I’d end up with a poem of the same title. Well I’ve put up the first draft for critique on one of the websites I sometimes visit. You can read it and comment while it’s up HERE.

I appreciate each and every feedback. You may not agree with my work and I certainly don’t want you to just accept what I say. Goes both ways, this thing called respect.

The original image (which I then fiddled with) is from wikimedia.

Spare the Karoo: Shoo Shell Away!

That word, “fracking,” sounds like a curse, or something worse.  To be honest I had never heard of it until a day or so ago. Petroleum giant Shell (among other usual suspects) is proposing to mine gas in the Karoo using fracking.

Now we all know that Shell’s reputation is as clean as a baby’s bum (before or after?). No wonder they throw millions at ad agencies and hit squads.

THE PEOPLE OF THE REPUBLIC OF SOUTH AFRICA DO NOT WANT SHELL TO DESTROY THE KAROO!

Is that clear enough to you, Shell bosses with big asses? 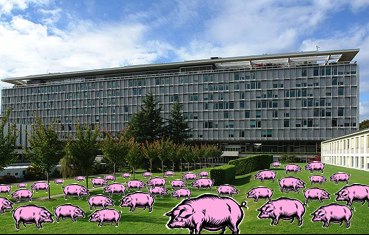 Evidence is emerging that traces swine flu to giant factory pig farms that are dirty, dangerous, and inhumane.