Ways of Hurting: Greece, “the creditors” and some robbers 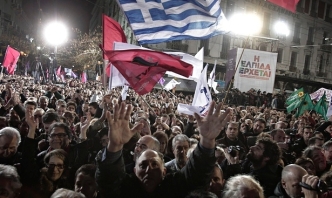 Photo from The Guardian

Someone declares “Bleed your people, for they deserve to learn that gods need to be appeased.”

Another says “See how straight the strings of these puppets. Their limbs jerk with the slightest twitch of our wrists. You must learn from them.”

The chief who was chosen by his own people stares them down, eyes unflinching. He may not know tomorrow, but he knows yesterday. And he stands today, not alone among those who dare to imagine another way of breathing.

Meanwhile, pensioners are shot and robbed in one place, and in another, a man in a wheelchair – not the first – robs a bank.

There are many ways of hurting. There are countless ways of coming together again.

Ukraine and the Holy Triumvirate

Ever since I read one of his books, William Blum has continued to astonish me. In his latest post he makes it possible to see clearly and simply what has been happening in Ukraine.

Read and wake up.

When an army engineer reportedly asked the Kalingas for titles to their ancestral land, Dulag was said to have replied, “You ask us if we own the land. And mock us, ‘Where is your title?’ Such arrogance of owning the land when you shall be owned by it. How can you own that which will outlive you?”

Yesterday was the death anniversary of Macliing Dulag, a tribal leader who was among the countless murdered during the Marcos years.  He led his tribe and organized other indigenous tribes in the fight against the World Bank funded project to build the Chico Dam which would have ended the way of life of indigenous Mountain Province people.

Here is a link to an article from GMA News.

In the same article the name Manuel Elizalde Jr came up.  He gained notoriety when he “discovered” the Tasadays in Mindanao.